Our Last Day in Yellowstone 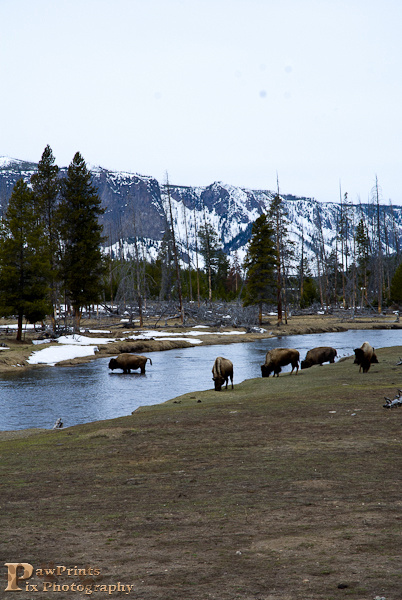 Heading Back into the Park

So after spending a day in Jackson Hole we headed back into Yellowstone for our last day of vacation.   The plan: head for the geysers, mudpots and prism pools.

Most of the side roads were still closed due to the snow so we couldn’t get to any of the waterfalls.   I think they are supposed to reopen sometime a week or 2 after we return home.

The big attraction for day was to be the mudpots.   This is one of the features of the park that Jaye remembers best from visiting as a kid.

The day is pretty overcast and it’s threatening rain/snow.   There’s a chill in the air and not very many people on the roads.

One Stop Before Heading into the Park
When we got back from Jackson Hole Thursday we drove into West Yellowstone (the town at the west entrance to the park).   There we saw a great IMAX movie about the park then visited the Grizzly and Wolf Discover Center right next door.

The Grizzly and Wolf Discovery Center is home to 6 grizzly bears and 8 grey wolves.   These animals were rescued when they could no longer live in the wild and given a home.  The facility is right outside the entrance to the park – so the habitats are as close to wild as is possible.   The center focuses on giving the public the opportunity to observe and learn about the grizzly and the grey wolf.

Of the 6 bears we got to see 2 of the youngest.   The bears hang out in their dens most of the time.   When it’s feeding time the dens are closed locked down and the keepers enter the enclosure hide food all over.   Then they let the bears out to eat 2 at a time.   Each pair is on a staggered feeding schedule so only 2 are out at a time.

Thursday night we got to see Sam and Illie.  They were rescued in Alaska as cubs when their mother was killed.  Alaskan grizzlies are larger than the Wyoming grizzlies.  I think the keeper said Sam was 9 feet tall and weighs over 1000 lbs.

This is Sam.  Illie was shy and hanging out in the back so I didn’t get anything good of her.﻿ 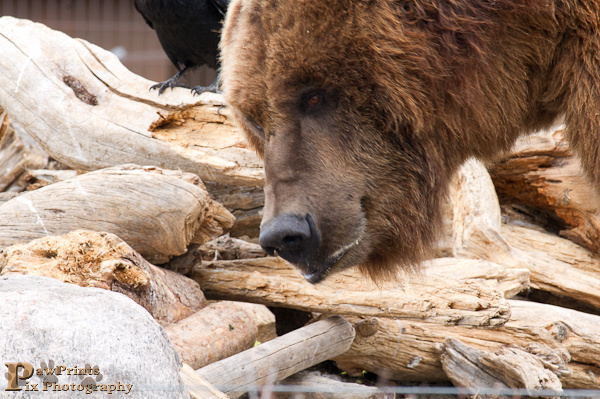 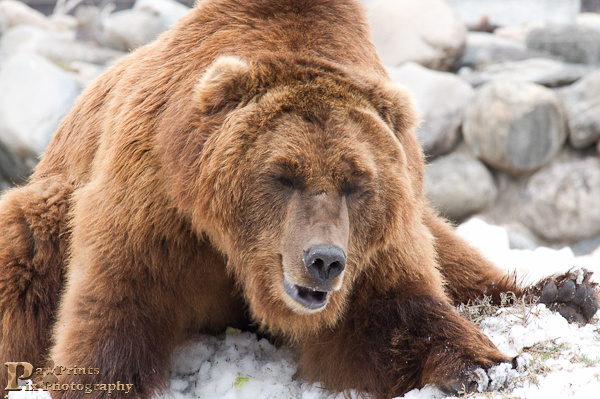 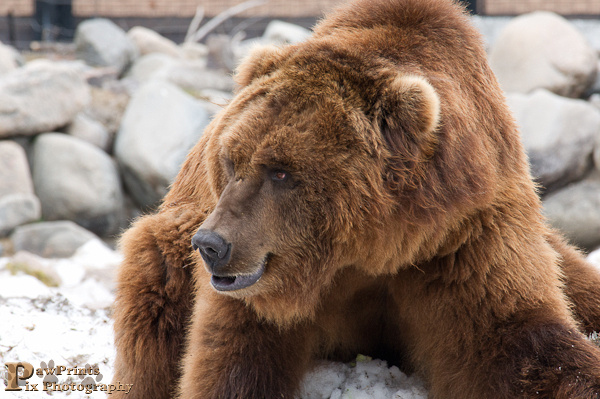 The following morning, on the way into the park we stopped again and got to see 101.   101 is 29 years old.  She got her name because she was the 101th bear to be radio tagged within Yellowstone park.   After living 20 years in the wild she got too fond of human food and became a danger to people and herself so she was brought to the center.    She is much smaller than Sam and Illie. 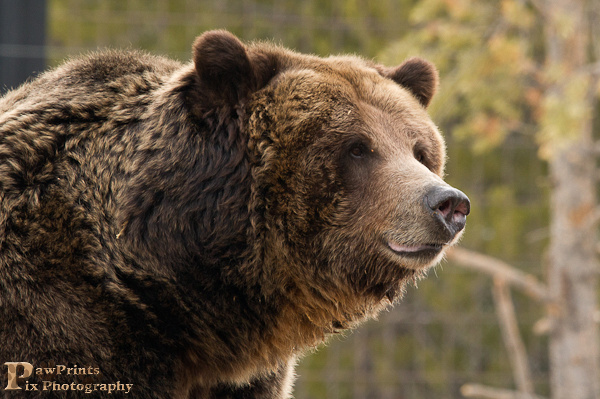 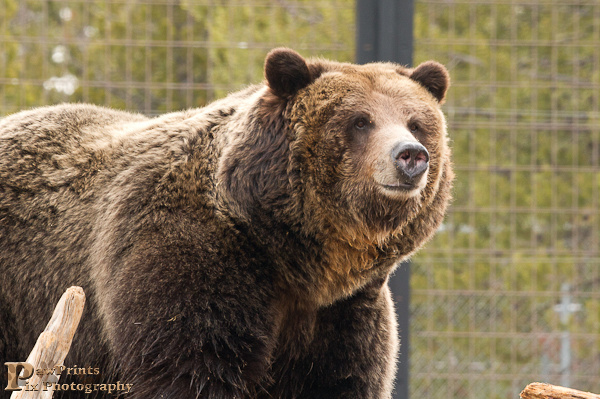 In the bear enclosure there were also a whole flock of Ravens.   These intelligent birds watch the keepers hide the food and before the bears come out they are getting their fill first.  101 does not like Ravens and took a swat them – apparently that’s pretty common for her.   The Ravens are quick enough they aren’t afraid of the bears at all. 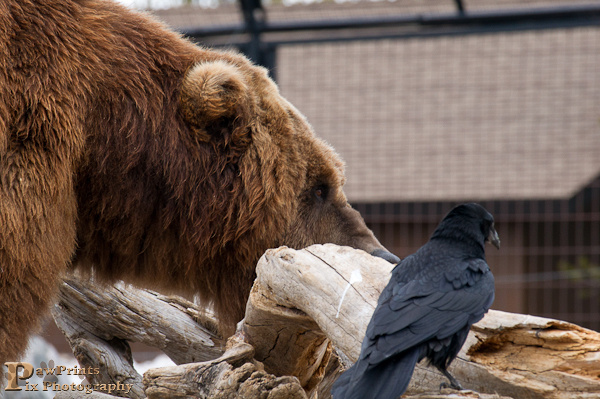 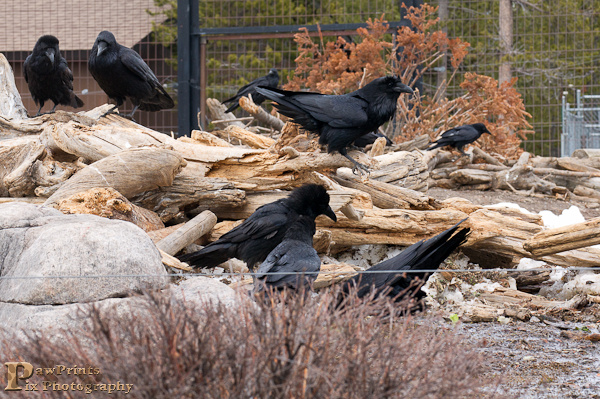 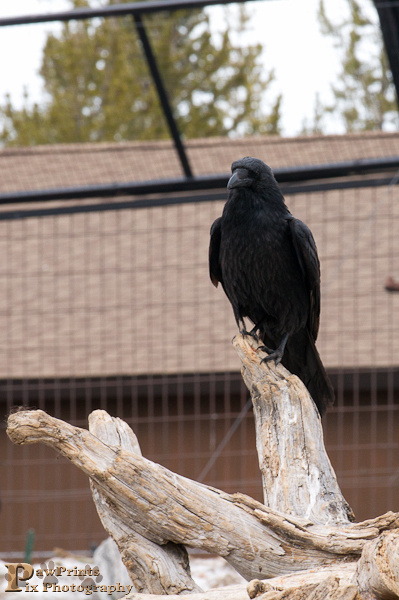 The wolves were all sleeping except 1.  He was watching the people as closely was we were watching him.   You could see the intelligence in his eyes.  These guys all looked well feed and healthy. 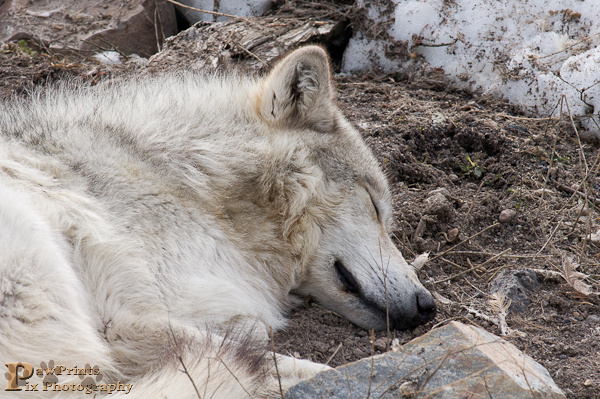 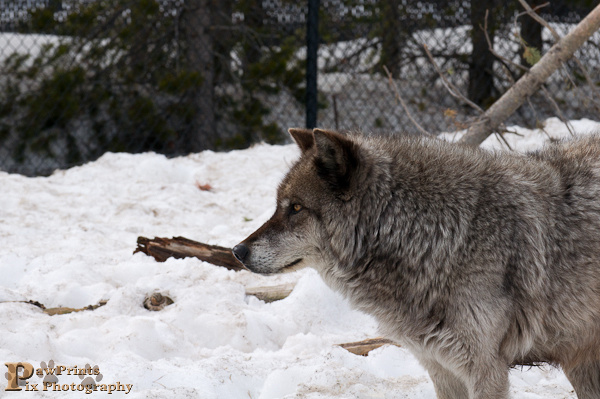 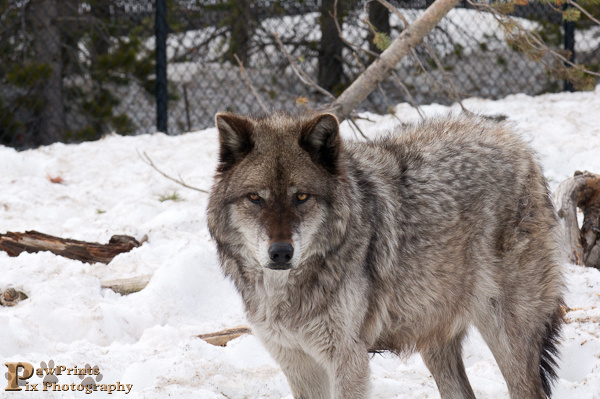