There Aren’t Pelicans in Illinois

Somebody must have forgotten to tell the Pelicans 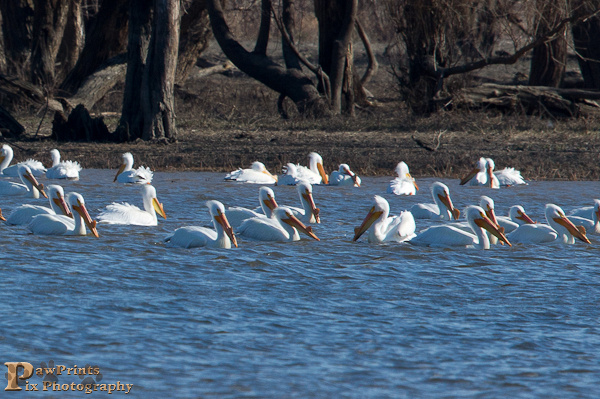 The American White Pelican is a VERY large bird.  It weighs 11-20 lbs and has a wingspan up to 9 ft.

Last spring some friends told me the every year the white pelican migrates Illinois.   They nest in Canada and the Northern US and winter along the Gulf of Mexico.  They pass through here in March/April staying for only a few weeks.

The Search
Yesterday we went out in search of the American White Pelican.   Some good friends had told us that the local newspapers in towns near Starved Rock State Park were reporting pelican sightings.  So I packed up my 400mm zoom lens, and tripod and we headed to the park.

It looked like it might be we might have missed them – that they had moved on.   In fact we weren’t seeing hardly any birds at all on the river.  There were a lot of fishermen out in their boats so we thought that might be the problem.

I did capture this one lone great blue heron.

We decided to try one more spot then call it a day.  We headed over to the IVCC cannel.    This is a much quieter part of the river – there were no fishermen.

Jackpot
As we came over the bridge headed toward the cannel we saw a couple of big white birds flying over the area. 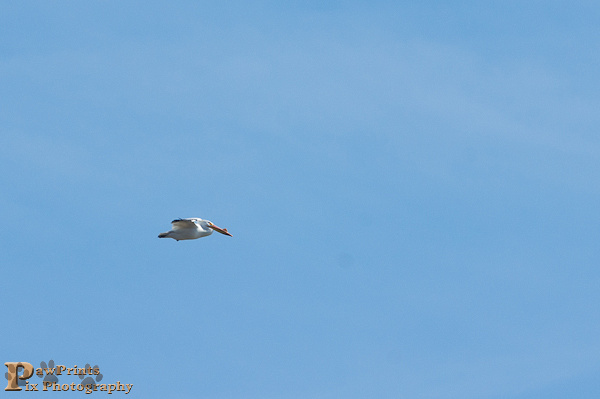 Then we could see the river – and it was covered in birds — hundreds if not a 1000 or more American White Pelicans. 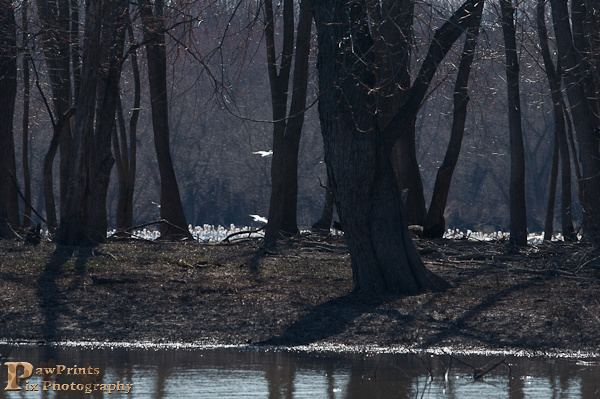 To get to a place were we could really see the pelicans we had to hike through the trees and what is normally a flood plain.   It was dry (sort of) and we were able to get up to water. 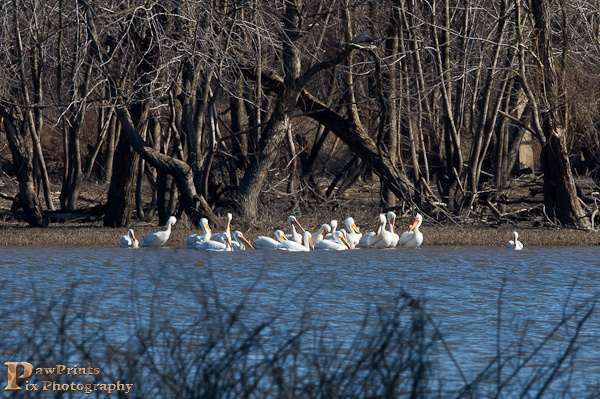 Flock of Groups
The whole flock was enormous but there appeared to be subgroups within the whole.   Before we arrived the flock had started to move on.   For the 20-30 minutes we stood and watched small groups of 20+ birds would take off to follow the others. 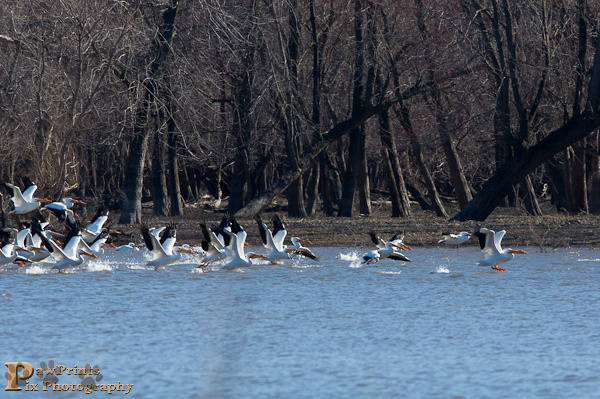 One bird within the group would start to run then the whole groups was on the move. 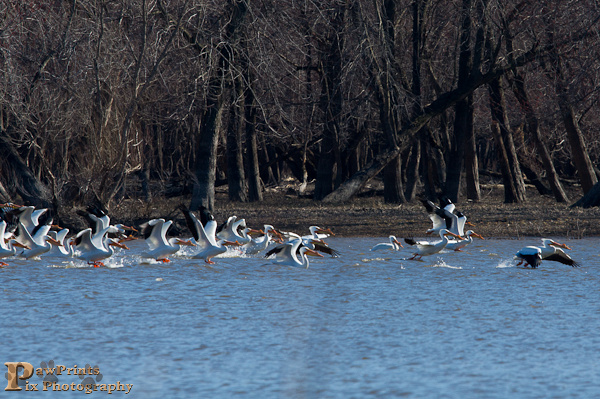 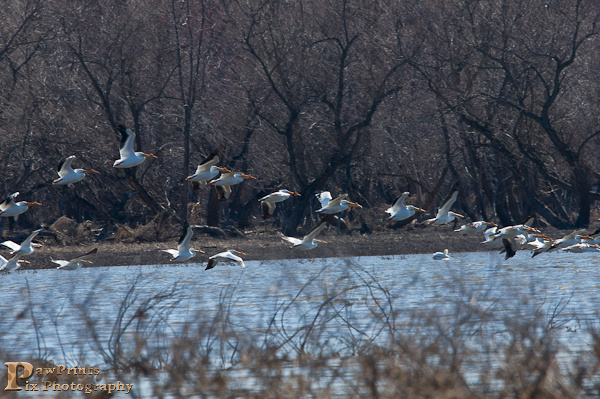 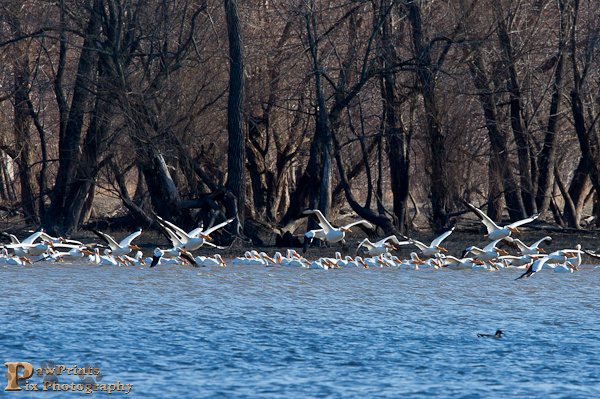 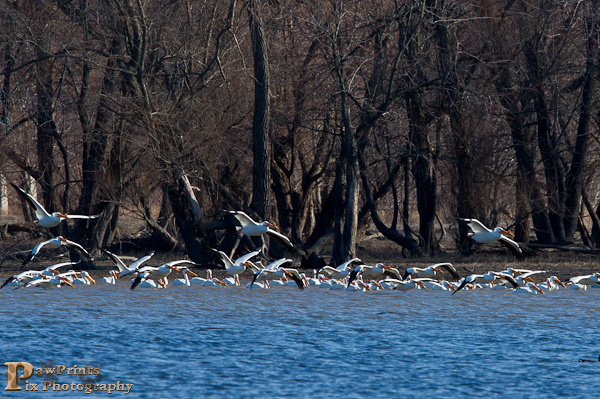 Within about 30 minutes nearly all of them had moved a bit further downstream.  We coud still see them – we think the fishing was probably better further down the way. 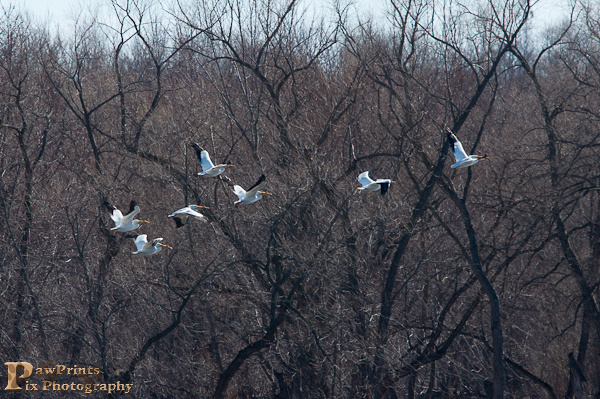 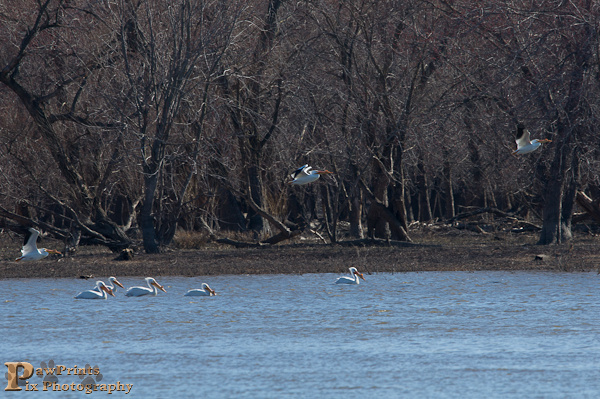 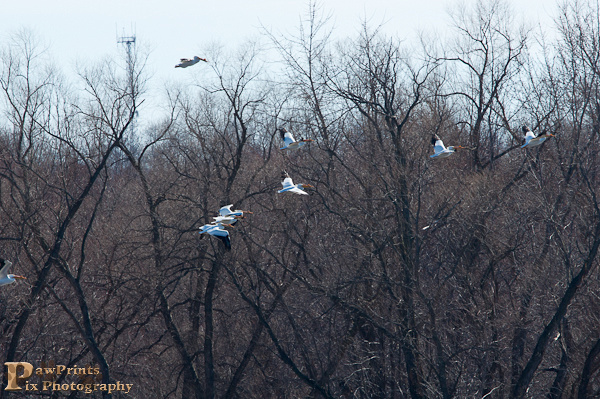 Look Up
In the sky it looked like an invasion.  There were sooooo many birds. 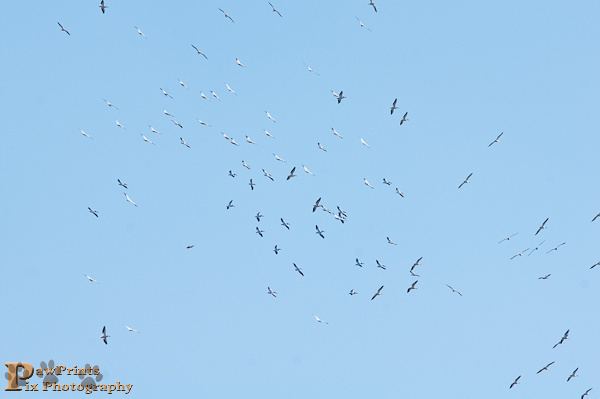 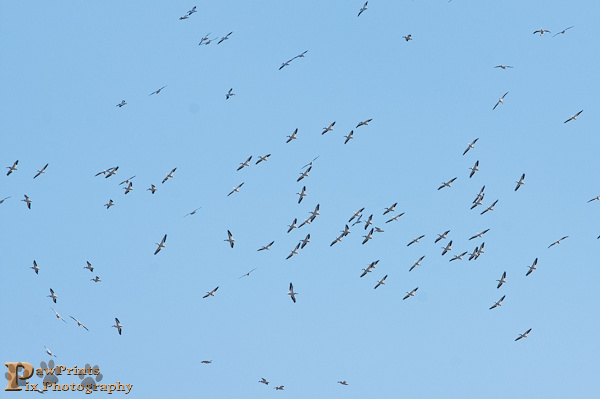 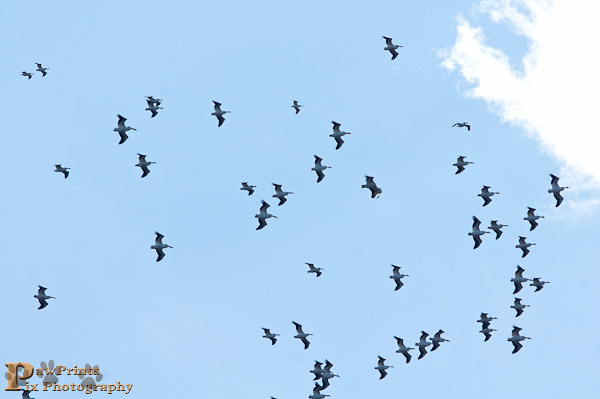 I never thought I’d witness a sight like this without going to Africa or some exotic location.  To see such a wonder of nature is truly awe inspiring.

More Information:
Here are a few sites that I found with good information about the pelican.
http://www.greatriverroad.com/nature/pelican.htm
http://www.answers.com/topic/american-white-pelican