﻿﻿﻿ The Ming Tombs
Our first Saturday we took an all day bus tour – our first stop the Ming Tombs.


The Ming Tombs are located about 50km north of Beijing. The site was selected by Emperor YongLe in the 1400′s for it’s location between a mountain and a river according to the priciples of Feng Shui. This helps to keep the bad spirits and evil winds away.


There are 13 emperors buried buried in this 40 square km valley.   It is the Chinese equivalent of the Valley of the Kings in Egypt.   The tombs are pretty spread out - you can see others in the distance. ﻿﻿


﻿﻿﻿Currently there are only 3 tombs open to the public. The largest, the ChangLing tomb, is the that of Emperor YongLe, his empress XuShi and 16 concubines.

This massive hall is supported by 43-foot Cedar columns so large in diameter it would take a couple of people to reach all the way around them.  The hall is now a museum filled with artifacts from the Ming dynasty.   In the center is the statue of Emperor YongLe (pictured above).

Exiting the Hall, moving toward the tomb, you next encounter the gate of the dead (not sure the exact name).   On one side is life and the other is death.   When an emperor died the pall bearers that carried the coffin through the gate were killed.  We walked around it to go to the tomb.
﻿﻿

﻿﻿Inside, at the top is the headstone.   This one was painted red during the cultural revolution.  The guide said that the elements are finally starting to fade the paint and the stone is regaining it’s natural color.

The tomb itself is a simple, but VERY LARGE, mound of earth covered with trees, grass and singing birds and according to the guide a snake or 2 for protection.

Back to the Light
Leaving the tomb we head back into the light, declare “I return from the dead” and head to our next destination. 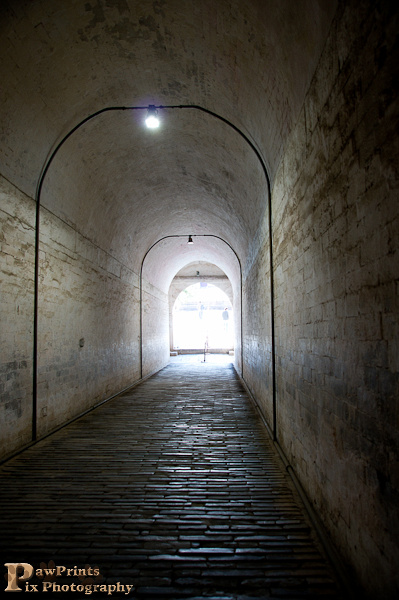